There’s nothing better than finding a treasure.  While cleaning out an old house on our ranch gold surfaced.  It was the book: “Southern Colorado, Historical and descriptive of Fremont and Custer Counties with their principal towns.  Canon City, and other towns, Fremont County Rosita, Silber Cliff, ULA and wet mountain valley, Custer County. With a description of the IMMENSE (caps mine) Mineral Regions of Fremont and Custer Counties.”
ILLUSTRATED!  (Exclamation point, mine.) Whew.  I’m not sure where the title stops and the subtitle(s) begin.  It was published in Canon City in 1879 by Binckley and Hartwell. 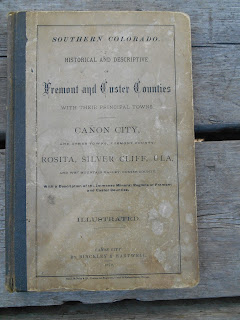 I’ve been perusing this book and have found a few familiar stories, like one about the bloody Espinosas and their demise and also an account of the first discovery of dinosaur bones in Fremont county which they called Bones of the Monsters.
There was also history about the founders of  Canon City, how the town got its name, and sections on thieves and train robbers.


However, it was the section labeled, “Reminiscences, Anecdotes, etc.” that caught my eye.  As I was skimming and scanning, one entry brought me to a full stop.  It was titled, “Heap Bueno Papoose!” (exclamation point NOT mine.) This half a page story told about a group of peaceable Sioux on their way to get their annuities who stopped at a camp of travelers west of Fort Kearney.  One of the members of the party was Mrs. Thos. Macon, the wife of one of Canon City’s founders.  After the Indians had milled through the camp, made trades, and finally departed, Mrs. Macon discovered her baby missing. She immediately set out, at the front of a search party and they caught up with the Sioux about a mile down the trail.  Not wasting any time, Mrs. Macon found the Sioux woman who was hiding the boy under a blanket.  Mrs. Macon took her child back, and according to the story, the only explanation given by the Sioux about the kidnapping was, “Heap Bueno Papoose.” 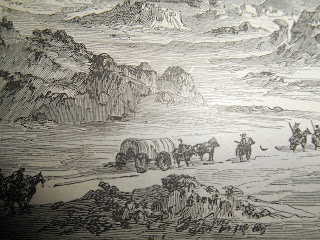 This is exactly why this book was such a treasure.  Fiction writers love this kind of gold.  A whole imaginary story unfolded—possibly an entire book.  And my author's mind shouted, “What if?!” What if the Sioux woman hadn’t given the child up?  What if the settlers had gone to the Sioux camp and not been able to find the baby?  What if the Sioux had already traded the baby along the trail?

The most fascinating thing of all was the Sioux’s explanation for the kidnapping: “Heap Bueno Papoose”—the mix of Spanish, Anglo, and the word “Heap” that in my own experience comes from Tonto and the Lone Ranger. (Heap big trouble coming, chief.)  Somewhere before the Lone Ranger, this word was actually used on the Plains…before 1879 to be exact.


This is why I love writing historical fiction.  The gold is in the details of real people who lived real lives somewhere back in time.
Posted by Unknown at 2:53 PM 9 comments: Links to this post

The cover of a book is like a handshake with the reader and makes a lasting first impression. Too limp and lifeless, it's ignored, and if it's painfully strong--ouch!  In other words, the cover speaks volumes before the first word is read. The title and artwork combine and create an invitation to read.

My experience with titles is mixed.  While I’m drafting, I use a
working title which, so far, has never been used on the final cover.
And for nearly every project, I have long lists of possible titles
that for one reason or another don’t measure up.


Sometimes I come up with the final title, and sometimes it's a collaboration. But often the publisher comes up with a title that fits perfectly.  The title for my new book is an example of this. I had a couple of working titles that were OK, but  when Doris Baker, of Filter Press suggested Trouble Returns for the third Ruby and Maude Adventure, I didn't hesitate to agree. 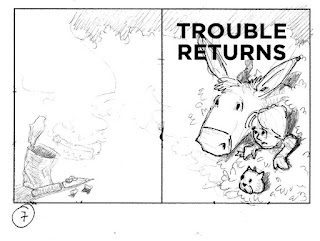 There is a lot more suffering surrounding the choice of cover art.  I suspect Doris Baker and the artist, Jamie Stroud, are sorry they ever asked my opinion! I try hard to make mind pictures for my readers when I write, but no one visualizes the characters and setting the same way as I do. 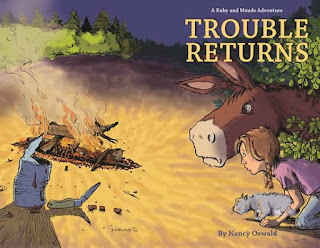 I understand this, but I'm still like a spoiled child when it comes to the cover illustration.  I want the cover characters to look exactly the way they are in my mind.  "After all, they ARE my characters!”  I spend more time with them than I do my best friends and lay claim to the mental images created from hours of  historical research, time spent sifting through historical photos, newspaper archives, museum visits, and travel for the purpose of depicting the story as accurately as possible. 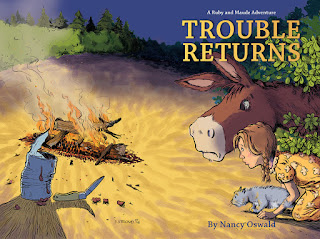 When I first see the cover sketches, I agonize over every detail and wish for an artist clone who can mind meld with me and reproduce the contents of my brain. In the end, I'm thankful no clone exists. Recently, I shared the above image for Trouble Returns with a friend, and she blurted, “I love it!”

And that has been my experience with the many readers who comment on the covers for my books and give them high praise.  The cover artists have done wonderful work. From Cathy Morrison, http://cathymorrison.blogspot.com/  cover illustrator for the book Hard Face Moon...

...to my Cousin Shannon Chandler https://www.facebook.com/scchandl/about who illustrated the cover for Insects in the Infield.

And most recently Jamie Stroud  http://jamiestroud.com/children.html  the artist for Trouble Returns and all the other Ruby and Maude Adventure covers.  Thank you, Jamie, for letting me share your thumbnail sketches, and for your vision and artwork on behalf of Ruby and Maude.

Posted by Unknown at 11:27 AM No comments: Links to this post

Yesterday marked the two week anniversary of the Hayden Pass Fire.  This fire was the second one for us in the past 5 years.  In 2011, the Duckett Fire raged up the Sangre de Cristos from the south.  I could write a thesis on how we delayed moving our herd of goats down the mountains until we saw flames moving towards their mountain pasture, and how at dawn, with the help of neighbors, we tossed the kids in a trailer one by one, to transport them to safety, but that’s a story for a different day.

During both fires, we stayed put as our house is surrounded by open space--sub-irrigated meadows to the east, and plenty of grassland between us and the upper end of our family ranch which shares a fence with the National Forest as well as BLM acreage.

Up near the forest, we have a rustic two room cabin. It’s not valuable in itself, but has a memorable history.  First, it used to be the bedroom of our old house, but long before that, sometime in the early 1900's, it was moved from the site of the 1882-1884 Cotopaxi Jewish Colony and spliced on to existing house to add more rooms. We lived in that house until about 1994 then dismantled it, board by board.  All except for the bedroom section that we hauled back up the forest to use as a hunter’s cabin.

During the Duckett Fire, a hot shot fire team miraculously saved the cabin. I can throw a stone from the burned trees to the small clearing where the cabin sits, and  I am still amazed at how the fire crew managed to protect this structure amidst strong winds and shooting flames.


The Hayden Pass Fires was no less intense. The fire roared in from the northwest thundering down valleys and over ridges until it crossed through the same area as  the Duckett Fire. This time all our livestock was down on the meadows surrounding our house. But looking west at the mountainside covered in smoke and flames, I held out little hope for the cabin being saved a second time.  I mourned its loss, not for the monetary value, but for the loss of a piece of history.


Along with the other fire personnel traveling through our yard to access the forest, crews came through for the specific purpose of checking on spot fires in the vicinity of the cabin. We were told the cabin was still standing.


Seeing the cabin was like greeting a long lost friend. I’m grateful this piece of history survived, and more than grateful for the firefighter’s skill and fearlessness in protecting this humble building.

More about the Cotopaxi Jewish Colony, click on the above link, visit http://cotopaxi-colony.com/

or visit the Cotopaxi Colony FB page.
Posted by Unknown at 10:51 AM 7 comments: Links to this post